So this week has gotten off to an interesting start: I have been mad thirsty for almost twenty-four hours, and I am willing to bet that I have guzzled more water in this time than I had the previous two weeks. Which also makes me think that I had been eating something that I shouldn’t have. The problem is, I have no idea what it would have been; my diet has been very clean (or at least I thought it was). I really can’t recall what I ate last week because the week was pretty much a blur. I do know that I was glad that it was over. I also know that I didn’t sleep very well and I didn’t drink enough water all week last week, and maybe the week before also.

So today my body is feeling like I have deprived it of something, I have been drinking water like crazy all day, and I have been so freaking hungry! I am not sure what has happened or what I ate, but I will be so happy when my body gets over this and gets back to its old self. The roller coaster rides are killing me!

As I am typing this I am still trying to figure out what I ate that would have caused this insanity, but I can’t figure it out. I guess at this point all I can hope for is that I don’t do whatever I did again, which should be pretty easy since I have been going strong since September (with no cheats and absolutely no desire to!).

I do seem to remember that my weight went down early last week and then it spiked, and I remember that I wasn’t surprised that it spiked, so I must have known that whatever it was that I had eaten was going to cause that to happen.

I did manage to do something cool: I figured out how to make my own breakfast sausage. I love sausage and eggs for breakfast, but I can’t get by with just eggs. I stay hungry until lunch if I just eat eggs, and every type of breakfast sausage I have looked at not only has crazy ingredients, but sugar! So I began to look at different recipes, and I did a little bit of experimenting, and this is what I came up with:

One pound of ground pork

During my first experimental batch, there were entirely too many spices involved, and some of them weren’t the right ones. It was good, but it needed work. This was my second batch, and it came out very nearly perfect. I found out that the key (for me) was the garlic powder and salt. I don’t have measurements for them in the ingredient list because I didn’t measure them. I put in quite a bit of garlic powder – to the point that I was worried that I had put in too much. I know that people’s tastes differ when it comes to salt, too. I usually use more than I think a lot of people would. So just salt it to taste. Let the sausage sit in the refrigerator for 24 hours after you mix all of the ingredients together so that the flavors will meld, and then cook it up and enjoy it!

I love beef stew, but as restrictive as I am with my Paleo diet, I can’t have any of the vegetables normally found in beef stew. I have been hard pressed to come up with an alternative, but I think I finally found one.

For this recipe I used two pounds of stew meat, a butternut squash cut up (I found some diced butternut squash at a grocery store that I shop at), one yellow onion, four stalks of celery, and a whole bunch of mushrooms. Dice all of the vegetables in fairly large pieces, about an inch thick. Throw it all into the crock pot with a bay leaf, a sprig of fresh rosemary, and two cups of chicken broth. Add some salt and pepper and let it cook for six hours on high.

OMG it is so good! 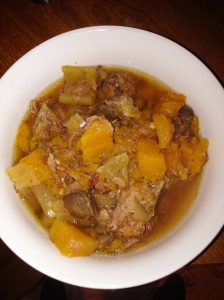 I found this recipe in the Paleo Diet Cookbook  and I had to try it.

Heat the olive oil on medium heat in your skillet. Add the garlic and saute for one minute, stirring so that the garlic doesn’t burn. Add the tomatoes and stir, cooking for two minutes. Add the shrimp and cook until the shrimp turn pink. Remove from pan – put them in a bowl – and cook the scallops, about five minutes (or until they are done, whichever comes first). Add the scallops to the shrimp and tomatoes, and stir in the remaining ingredients.

This was a pretty good snack for my fiance and I. The scallops were definitely a treat, but the recipe in the book doesn’t even call for them. I added them simply because he and I both like scallops, and they worked really well. I think that as everything sets the resulting sauce may pick up the subtleties of the different flavors involved; we ate the majority of the shrimp and scallops right after they were done cooking and felt that there was too much lime juice (the recipe called for juice from half of a lime). But when I went back for more, I felt that the flavors had melded a little better.

I never thought I’d say it. I’ve hated summer for as long as I can remember – probably as long as I’ve been overweight. But since I’ve started cooking the way that I have, I have been very sensitive to how the weather affects what produce is in season.

I MISS MY SUMMER SQUASH!

I put a chicken in the crock pot today, and all I wanted to go with it were the little yellow eight-ball squash that I had been using with chicken and roast before fall came and took them all away. But I didn’t have any of those. All I had was a butternut squash, and I’ve never cooked that in the crock pot with any meat before. So I peeled it (a very tedious and not fun task, by the way), cut it up, and put in in the bottom of the crock pot, put the chicken on top of it, and added my spices. I usually throw some paprika, poultry seasoning, garlic, salt, pepper, and rosemary into some oil, pour it on top of the chicken, and spread it all around. Set the crock pot on high for six hours (the chicken is less likely to completely fall apart this way) and let it go.

I really need to find some new winter recipes. I’ll let you know how that goes.

I love sandwiches. They have always been one of my favorite things. When I used to do Weight Watchers, I lived off of Subway sandwiches. So for as long as I have been doing low-carb diets, I have seriously been missing my sandwich fix.

Enter the portabello mushroom caps. I had heard of these being used for sandwiches, but I had never had the guts to try it. After all, they are mushrooms, and I tend to make some pretty heavy duty sandwiches. How in the world will they hold up?

Turns out, they hold up very well. 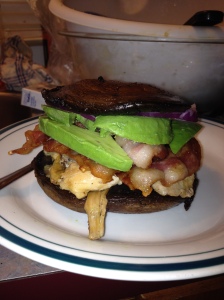 This sandwich has slow-cooked chicken in it, with bacon, red onion, and avocado. With the New Year here and the promise of spring around the corner, I am envisioning hamburgers with lettuce, tomato, pickles, onions, and anything else I can cram on there – all on mushroom caps as buns. I just made a sandwich this morning that had some of my pork green chili on it with bacon and avocado. Think about how yummy a steak sandwich would be on mushroom caps! The possibilities are endless!

So yesterday I wanted to try something new. I found this recipe earlier this week and I knew that I had to try it. The only changes I made were to double the recipe (I have PLENTY of leftovers!) and use slightly more of each spice than is listed (even after I doubled the amount).

This is by far the best chili I think I’ve ever made, even beating out The Best Chili Ever. The pork comes out very tender and the flavor is light enough that you can appreciate the flavors of the peppers that are a part of the recipe. I was a little concerned about the amount of heat that the chili had, so I only put one jalapeno in the chili; I think that in the next batch I will use two, because there is only a hint of heat when I used one pepper for a double recipe.

This will definitely be a fun recipe to tinker around with, and the chili was a great last meal for 2011.